The United States remains a very religious nation. Nine Americans out of 10 say they believe in god and the bible remains the American best seller, with sales of about 9 million copies each year.

I.         Religious Diversity
A.  No Official Religion
The Constitution prohibits the establishment of a national religion and protects citizens’ right to choose their own religion. The separation between Church and State prevents the government from favoring one religion or denomination at the expense of another. Thus religious freedom is guaranteed.
Apart from the Roman Catholic (under the authority of the Pope) and the Episcopalian (under the leadership of the Archbishop of Canterbury) churches, American churches have a very decentralized structure with authority in congregations. Protestants have no church hierarchy and church members organize in an assembly and choose their own minister. Churches of the first settlers soon split up into many different denominations which explains why there is not one but many types of Protestantism.
American religious diversity was also made possible because of the size of the country itself: if one group dissented or was the victim of religious intolerance, it simply moved elsewhere and founded its own church.
As a result of this freedom, all major religions are represented today: Protestantism, Catholicism, Judaism, Islam, Buddhism, Hinduism.  (1,500 religious affiliations)

B.   “One Nation under God”
One of the greatest paradoxes linked to religion in the United States is that in spite of the separation of State and Religion, American society is filled with religion, and Americans constantly mention God. The Pilgrim Fathers had a mission: create a model society, in America considered as the new Promised Land.
Americans see themselves as the Elect, chosen by God to create a unique model of society, based on a high moral code, austere, work ethic, predestination. 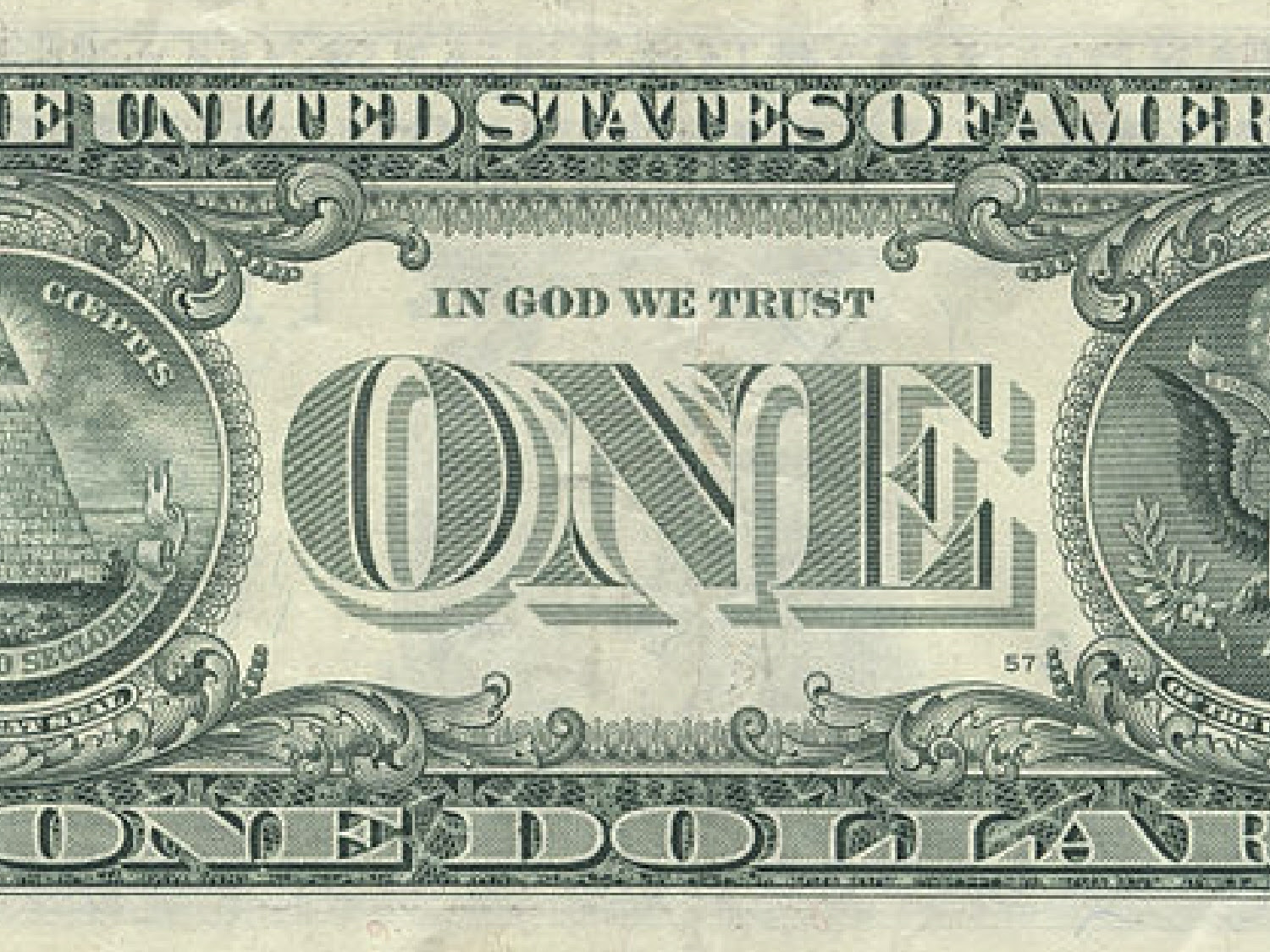 The Influence of religion is visible everywhere:
·         The National motto is “One Nation Under God”
·         “In God We Trust”is engraved on American currency
·         The influence of religion is visible in private and public sectors
·         Each American President swears his Oath of Office on the Bible
Prayer used to be compulsory in school until the School Prayer decision in 1962.
Religion is also often a stepping stone to political career many of whom were preachers such as . Ex: M L King Jr & Malcom X
Religion is also a form of socialization, extra Church activities, social networks, integration
C.  Religion, Class and Race
Religious diversity highlights social and racial differences.
Blacks and whites attend different churches.
Among protestants, Episcopalians are regarded as the “elite” denomination, while Baptists and Methodists belong to the less wealthy segments of the population.
At the beginning of the century, Roman Catholics were working class (low-income Irish members).  Now mainstream churches tend to be middle or upper class, while the more radical churches appeal to the poor.

II.          The Leading Religions
D.  The Protestant Denominations
55% of Americans are Protestants with over 200 different denominations, the most important of which are the Baptists.
Since the 1960’s, the influence of the mainline denominations has gradually diminished in favor of ore radical church groups. This shift to religious conservatism shows growing dissatisfaction of many Americans with churches that are considered as too liberal and permissive. 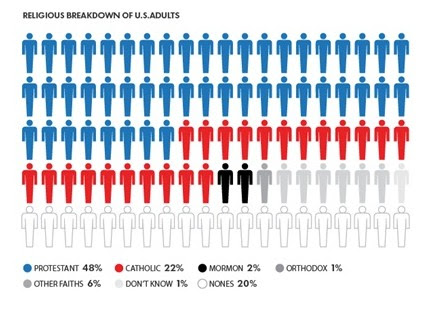 E.   The Roman Catholic Church
They represent about 28% of Americans. Catholicism was brought by Spanish, Portuguese and French missionaries and expanded in the early 20th century.
Looked upon with suspicion during the first decades of our century (they were believed to be immoral, guilty of paying allegiance to the Pope at the expense of the United States, and were a favorite target of the KKK in the 20’s). 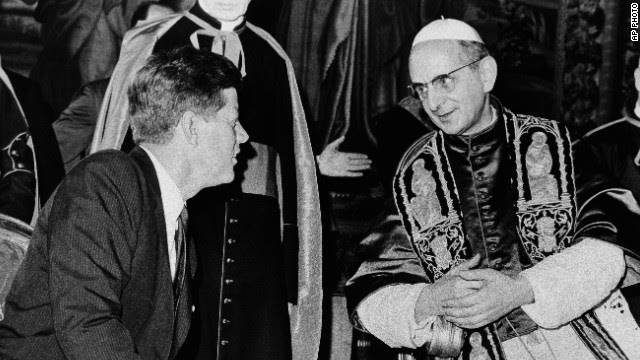 However, the election of JF Kennedy to the White House announced a change in the negative image.
American Catholics are less respectful of Rome’s guidelines than Europeans especially when it comes to ethical issues: using birth-control devices and divorce for instance.

F.   Judaism
They represent 2% of the American population. The first Jews came from Spain and Portugal and they integrated well to their Wasp counterparts. Today about 50% marry with non-Jews. Most knew how to take advantage of the education system to climb up the social ladder. American Jews play an influential political and cultural role through their organizations. Today, the survival of Israel is one of their major preoccupations for which they raise about 300M $ annually.
G.  Islam
Muslims represent less than 1% of the American population today. Islam is the fastest growing religion. Most Muslims are immigrants or descendants of immigrants from Muslim countries. 24% of African Americans converted to Islam from Christianity.  Many slaves were originally from Muslim Africa. The appeal of Islam for African-Americans is thus part for a quest for their lost roots. Islam today suffers from a poor image in the United States further reinforced by the Word Trade Center bombing in 1993 and the September 11th attacks of the Twin Towers. As a result hate crimes against Muslims against Muslims and South East Asians such as the Sikhs (mistakenly) went up in the months that followed 9/11. Often associated with terrorism, fanaticism and anti-Semitism, Islam is widely misunderstood and considered by many Americans with distrust.

To find out about sects and cults in the USA, see the Chapter on Religion, pp. 151-153, in  “Civilisation des Etats-Unis” by Marie Christine Pauwels, Hachette 2002 available at ISLAIN library under the reference CiAm 010
Publié par Unknown à 23:10 1 commentaire:

Hispanics and Caribbeans
Americans of Hispanic origin are the fastest growing minority today representing more than 12.5% of the American population.
Hispanics form a diverse community because of their origins: a majority comes from Mexico (Mexican Americans or Chicanos). The two other leading groups are Puerto Ricans and Cubans.

Hispanics as a whole come from 20 different countries. Therefore, there is little unity racially speaking. They form a heterogeneous socio-economic profile:
·

Anti-communist Cubans of the first wave were the most successful Hispanics as most of them were skilled professionals and managers in their homeland.
·         Puerto Ricans have been disadvantaged as far as education is concerned and can be said to be in a worse situation than African Americans
·         Mexican Americans stand in between.
In spite of their diversity, Hispanics are united on several fronts:
·         Linguistically: Spanish is the most widely spoken foreign language in the US
·         Religiously the majority are overwhelmingly Roman Catholic
·         Geographically: most live in the Sunbelt States (50% in California and Florida) ·         Socially: They have more stable family structures (70% of household are headed by a married couple) and a higher birth rate (18% more than 3 children)

·         Professionally: A large proportion of the Hispanic community belongs to the working class with jobs in agriculture, textile and garment industries, catering and domestic work. Because of illegal immigration, many work in the Underground economy.
Pattern of integration: Many Hispanics do not wish to apply for American citizenship, some never learn English. (Today the US is the 5th Spanish speaking country in the world). Many Hispanics retain an exile mentality. Cubans for instance who fled Fidel Castro in the 60’s never expected to remain in the US.
Many Mexican-Americans do not regard themselves as immigrants but feel they are settling on a territory that formerly was theirs. As they also hold on to their language and traditions, it has been said that they are building a “nation within the nation.”

Asian Americans (4% of US population)
Before the Chinese exclusion act of 1882, many Chinese came to the west coast of the US to build the railroads work in gold mines or as domestic servants.
The community is made up of Chinese, Filipinos, Japanese, Koreans and Vietnamese Refugees also came from Laos, Cambodia, Thailand and India.
This is a diverse community but which does share similarities. Asians are mainly known for their excellent academic achievements and spectacular assimilation. They integrate well, learn English quickly and ask for American citizenship. They often outperform whites at school and university especially in science: 30% of Berkley students, 20% of MIT and 15% of Harvad and Stanford.

The reasons for this success story are cultural. They have a Confucian view of the world (Confucius) which places a high premium on education, discipline and strong family ties. Asians therefore fully embrace the American work ethic and competitive spirit.
This success and their label as being a “model minority” generated animosity among whites as well as other minority groups. In the Los Angeles riots of 1992, blacks targeted Asian-owned stores.  Furthermore, they are affected by forms of disguised discrimination:  some universities where accused of imposing quotas to curb Asian presence.
.
American Indians/Native Americans
There are 2 million American Indians and about 500 different tribes: Cherokees, Navajos, Sioux, Chippewa’s, Choctaw, Pueblos, Apaches , Iroquois, Lumbees, Creeks.
Most of them live in the Southwest (Arizona, New Mexico, Oklahoma, Utah and Nevada) often on one of the 100 reservations.
Native Americans have experienced a history of painful struggle that began in the colonial period and continues today.
The only native Americans were slaughtered in the 18th and 19th century by frontiersmen who disregarded treaties signed between Washington and various tribes.
Those that did not die in the battles were moved to reservations.
The government had confusing policies with American Indians:
·         Elimination by military means (the battles of Big Horn 1876 and Wounded Knee, 1890);
·         Assimilation  as with the Indian reorganization Act in 1934. All Indians were granted citizenship in 1924

The status of American Indians is very often precarious. It is a predominantly rural population living below the poverty line outside the mainstream of American society.

40% of the Indians on the Navajo reservation in Arizona are out of work for instance.
Many of them work low-skill, low-wage branches. Others live off their local crafts.
Indians, especially those living in poorer reservations are suffering from many social ills: inadequate housing, disease, poor schooling and health and a high rate of alcoholism and suicide especially among the young.
Today, American Indians are torn between the need to adapt to modern American society and to keep their identity and tribal customs alive.
These are the goals of the National Congress of American Indians (1944) and the National Indian Youth Council (1961) both of which refuse assimilation.